In the Senator’s Shoes by 2016 Fellow Hadeel Hassan 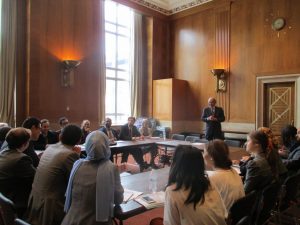 In the Senator's Shoes

One of the facts I was most excited about is that the Gabr Fellowship Program provides the fellows with the opportunity to get exposed to how policies are made. I have always had a very strong interest in exploring what happens in closed meeting rooms that could shape the world and hugely impact its citizens. And it goes without saying, being introduced to the policy makers in the US; take the spectacular experience to a whole new level.

We had a day planned with prominent congressmen and senators. It was one of the trip's highlights. I read about the speakers, prepared my questions and was thrilled to learn more about their world views and their readings on the situation in the region and what that could possibly imply. Similarly, I was curious about the way they think and how they present their arguments and ideas.

What I haven't thought about or expected was the fact that I would be invited to think and act like a senator, a real simulation in the Dirksen Senate Room. It was one of my favorite speakers; Senator Ed Markey who chose to make us live the experience, not only know how decisions are made, but actually get to make the decisions ourselves.

The minute Senator Ed Markey walked into the room; there was this different kind of energy and vibes. He was full of passion and enthusiasm. Without any previous remarks or hints he shared with us that he has to vote in a few minutes on whether the US should or shouldn't provide Saudi Arabic with tanks to support its fight in Yemen. He said you are my consultants and you need to advise me on my vote, should I vote YES or NO!! The room was on fire. I personally was on the edge of my chair. Each one of the fellows shared her/his opinion about the situation backed up with future anticipation, region analysis, or notes driven from the near and far history. It was an equally interesting and informative discussion that was more like an exciting Ping Pong game, an argument and a counter argument, yes and no, no and yes.

Before this session I have had major disappointments and doubts in the world's politicians, thinking they are part of the problem and never part of the solution. Now, I sympathize with them.