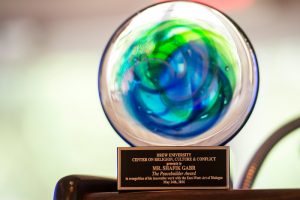 The Center on Religion, Culture and Conflict (CRCC) at Drew University honored Chairman of the Shafik Gabr Foundation (US), M. Shafik Gabr with the Peacebuilder Award alongside Dr. Shirley Sugerman, on May 24 at the Annual CRCC Gala. The CRCC focuses critical attention on the complex ways in which cultures and religions interact, especially in moments of crisis and conflict. The center is directed by Dr. Jonathan Golden.

Presenting the prestigious award was Member of the House of Representatives Congressman Howard Berman (1983-2013), who has been active in Middle East issues including the reconciliation between Israelis and Palestinians. Chairman Shafik Gabr received the Peacbuilder Award for his impactful bridge-building efforts, specifically in the facilitation of dialogue between the East and West, against a backdrop of increasing tensions and division.

The East-West: Art of Dialogue initiative is part of The Shafik Gabr Foundation (US)’ commitment to support and empower emerging leaders in both regions spanning all disciplinary fields.

Distinguished guests and friends of the Foundation included Congressman Howard Berman, George Selim, Director of the Office for Community Partnerships at the Department of Homeland Security (DHS); His Excellency and Mrs Ambassador Ahmed Farouk, Consul General of Egypt in New York; Brigadier General (Ret) Tom Cosentino, among many esteemed guests from business, politics, art, the world of global institutions and a number of Gabr Fellows.