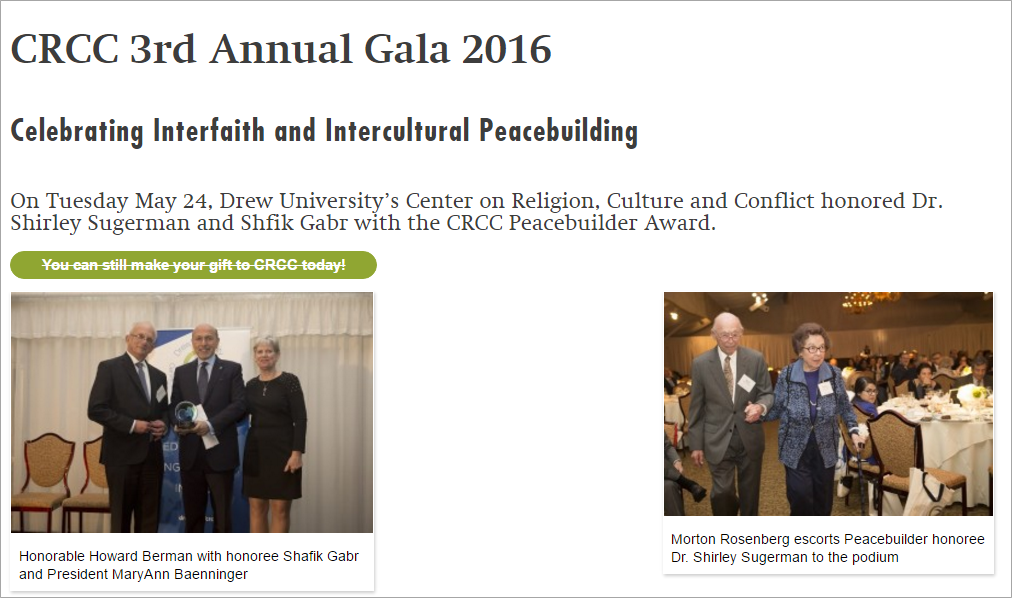 With the headline "Celebrating Interfaith and Intercultural Peacebuilding", the Drew University website has written about the award given to Mr Shafik Gabr by the University’s Center on Religion, Culture and Conflict (CRCC).

The award was presented to Mr Gabr on May 24th 2016 at the Annual CRCC Gala.

"Inspired by the progressive painters of the 19th and 20th century, Mr Gabr began collecting Orientalist Art in 1993. His collection now comprises of some of the finest examples of the greatest masters of Orientalism, published copies of which can be found in Mr. Gabr’s book – Master of Orientalist Art: The Shafik Gabr Collection.

Noting that these painters or, as Mr. Gabr calls them, “early globalists” had “opened routes to knowledge and understanding between East and West by immersing themselves in the Middle Eastern culture they painted”, Mr. Gabr sought to continue their legacy.

A dreamer with drive, Mr. Gabr took a proactive step to develop cultural dialogue and understanding by launching the East-West: Art of Dialogue initiative in 2012.

This dynamic program encourages young leaders to develop cultural understanding and education by funding their participation in exchange programs between the Middle East, Europe and the United States. Drew University and the CRCC are honored to be part of this program and regularly welcome Gabr Fellows on the Drew Campus".

Drew University is based in Madison, New Jersey.