The Importance of Cross-Cultural Dialogue 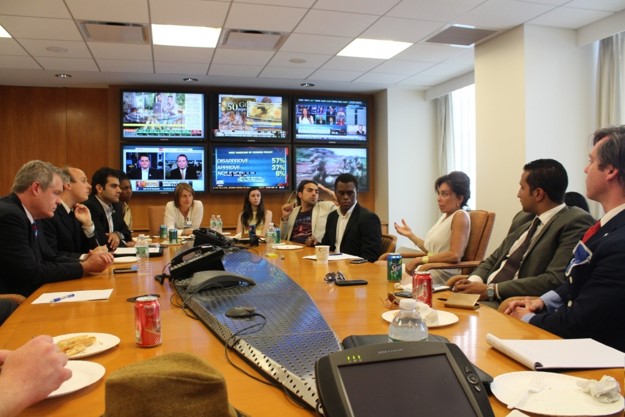 Fellows in a meeting with Judge Jeanine Pirro, CNN

The Importance of Cross-Cultural Dialogue
by Michael Goff, Gabr Alumni and Cofounder of Urban Cruise Ship

Like many people around the world nowadays, lately I have been behind my keyboard with a mix of grief, anger, and despair. Last week, a deranged man, who pledge loyalty to the Islamic State, killed 49 people at a gay nightclub in Orlando, Floria. Jo Cox, a rising MP in Britain, was assassinated for her support of the well-being of migrants and for Britain remaining in the European Union. The Islamic State and Boko Haram continue their reigns of terror. Memories of terrorism in Paris, Brussels, and San Bernadino are fresh in our memories. The far right is ascendent in Europe, and for the first time in my lifetime, national politicians in the United States are openly talking about religious discrimination. It can feel that the world is being engulfed in hatred and chaos.

These worries were far from my mind in the summer of 2014, when I traveled throughout the United States and Egypt with 10 Americans and 10 Egyptians, through East-West: The Art of Dialogue with the Shafik Gabr Foundation.

During those four weeks of travel, I was immersed in the culture, history, and politics of Egypt, learned a great deal about my own country and how it is seen around the world, and built friendships to last a lifetime.

What I observed in both countries were vibrant, optimistic societies that, while both have significant challenges to overcome, have ample reason to be confident for the future.

I will never forget the enthusiastic young entrepreneurs at the GrEEK Campus in Cairo, busily building ride sharing and augmented reality apps, or the vigorous debates among the students at the University of Cairo over what freedom and rights mean amidst the challenges of the post-Mubarak Era, or the museum curators who beamed with pride in presenting Egypt's history of five millennia.

The most common question I was asked by my friends and family, prior to the fellowship, was "Is it safe in Egypt?". They knew little of the country aside from The Pyramids and the political conflict that they had seen in the news. In their defense, I didn't know much more myself. In fact, by all appearances, Cairo, Alexandria, and Luxor were every bit as safe as Nashville, Tennessee; Portland, Oregon; and New York City, though I must admit that I found the traffic a bit frightening.

"It's not a free country," some objected. There is room for debate - and indeed vigorous debate is occurring in Egypt - on topics such as the protest laws or protections for journalists, but what I observed during my two weeks in Egypt bore no resemblance to an oppressed state and every resemblance to my own vibrant society.

To see and learn the things that I did, there simply is no substitute for traveling and meeting people. Television, the internet, and social media are indispensible tools in the modern global economy and society, but they can only take us so far in true understanding, especially understanding of things as complicated and dynamic as a culture, a religion, or a nation.

For me, to be chosen as a Gabr Fellow was a privilege of a lifetime. But for the world, East-West: The Art of Dialogue and programs like it are indispensible. The forces of globalization - trade, travel, and communication - have made the world smaller. But as Pope Benedict XVI once said, "Globalization has made us all neighbors, but it has not made us brothers and sisters." Recent headlines are a sobering reminder of this.

But rather than harbor illusions that we can turn the clock back on the interconnected world, we need to embrace that most important, but often neglected, promise of globalization: that all people in the world can recognize their common humanity.

Unfortunately, not everyone can have the same opportunity that I had. But all of us do have the opportunity to reach out to our neighbors who might have a different nationality, religion, or political ideology than we are used to. Doing so not only diminishes the forces that would tear the world apart, but it teaches us that the world has far more goodness and opportunity to offer than we imagined.