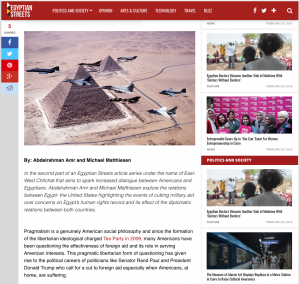 In the second part of an Egyptian Streets article series under the name of East-West Chitchat that aims to spark increased dialogue between Americans and Egyptians. Abdelrahman Amr and Michael Matthiesen explore the relations between Egypt and the United States, highlighting the events of cutting military aid over concerns on Egypt’s human rights record and its effect of the diplomatic relations between both countries.