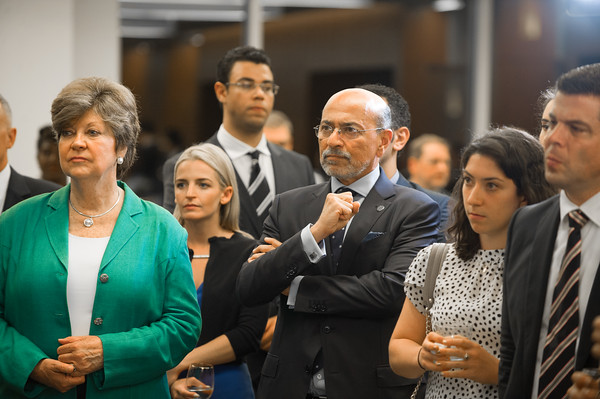 2016 Fellow Kate Chiucchini amongst the audience at the Annual Art of Dialogue Reception.

The opportunity to participate as a Gabr Fellow in the East-West: The Art of Dialogue initiative was an enlightening and powerful experience that I will never forget.

When I first heard about the Fellowship, I instantly knew I wanted to apply. The mission of the initiative, to promote greater understanding between the East and West through a cultural exchange of emerging leaders from the U.S. and Egypt, resonated with me on a personal level. This was partly because I have a great-grandfather who was from Cairo, and Egypt represented a piece of my family’s diverse heritage that I knew very little about; and partly because I believe understanding is truly developed through actual experience and direct interaction between people. The experiences that I have had in the past to work or study abroad significantly impacted my life and influenced my career path, and the Gabr Fellowship sounded like an opportunity to challenge myself and learn about a region of the world that I was embarrassingly unfamiliar with.

During the time after being accepted to the Fellowship, and leading up to the day of departure to Egypt, I was surprised at how nervous I started to feel. All of the other Fellows had sounded so impressive in their bios, and I didn’t know how we would all end up interacting with each other in such a large group. On our first day in Cairo, the American Fellows were asked to write down three preconceptions they had coming to that region of the world for the first time, and then to read them out loud. As someone who prides herself on being very open-minded and not judging others on the way they look or first impressions, it was eye-opening to me that I had preconceptions that I didn’t even realize I had coming into this experience. Until that moment, I hadn’t consciously thought about the fact that I didn’t have any female friends who wore a hijab. I hadn’t realized until meeting the female Egyptian Fellows, the majority of whom wore a hijab, that I had a preconception about women in the Arab world completely based in generalizations and unfamiliarity with a culture. I had to ask myself: how did I let that happen?

The experience I had during this Fellowship significantly emphasized to me the importance of direct cross-cultural dialogue and exchange on a different level from that which I had previously acknowledged and appreciated in my life. For my generation from the U.S., in the post-911 world, there has been a sense of “other” created for a region that is unfamiliar. Breaking down stereotypes and the perceptions that are formed when something is unfamiliar or different starts with exposure and continues through dialogue. What I learned throughout this Fellowship, from talking to the other Fellows directly and asking each other questions, is that we actually share more similarities than differences.

I now truly understand the mission behind the East-West: The Art of Dialogue initiative. The extent of knowledge that I gained in such a short amount of time is extremely motivating and inspiring. The rare, strong bond that was formed between the Fellows through a shared level of personal understanding, support, and encouragement is a testament to what the Gabr Fellows represent. I feel very lucky to now be able to call such a genuine, inspiring, and impressive group of people my friends. Interacting with other like-minded peers, who have the potential to make a positive impact on a global scale, has shown me that we can make a difference in the future.